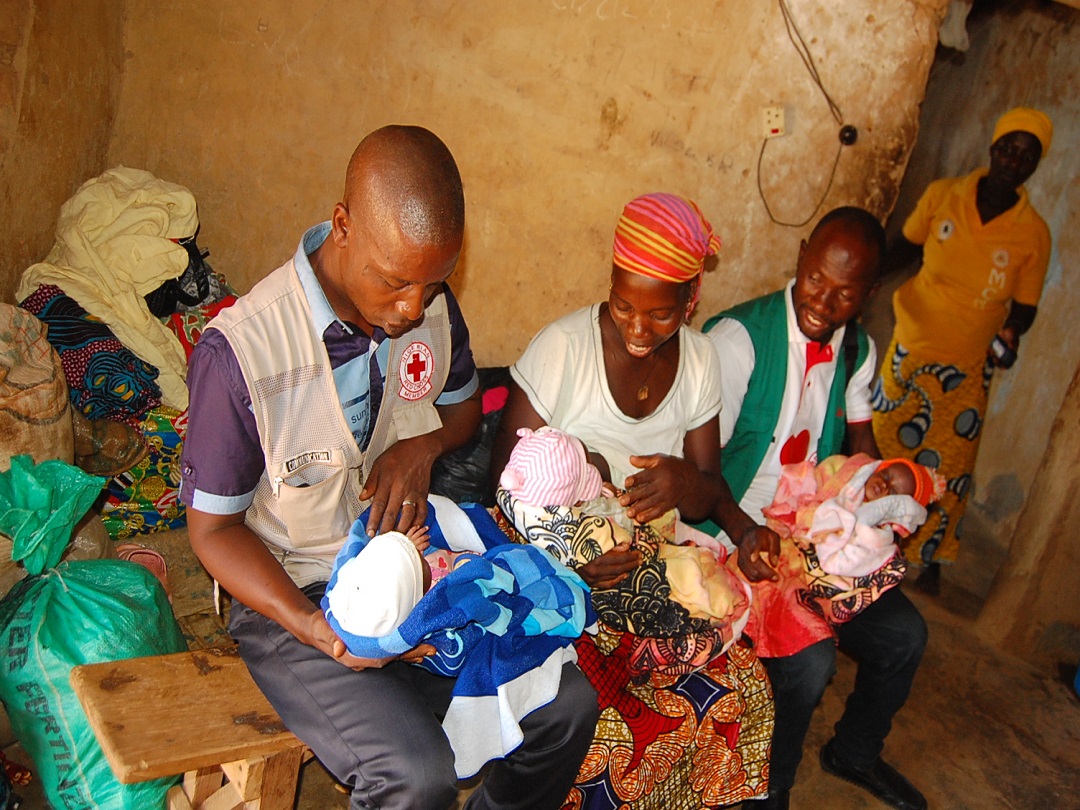 Mrs Esther Mairiga was heavily pregnant and close to her delivery date when Karamai-Maro –a neighbouring village-was attacked on 26th of February, 2019 by unknown gun men. She fled with her husband and children carrying no personal belongings including delivery kit.

For Mrs Esther, fleeing her home in the wake of the attack on Karamai Maro community few kilometers away from where she lives was not in the least of her contemplation for an environment always known for peace. She never imagined that ugly incident will occur at all, not to imagine it happening couple of days to her Expected delivery date. But it happened and she and hundreds of others ended up in an IDP camp at Maraban Kajuru.

The dark memories of Brutality that traumatize most internally displaced persons (IDP) gave way to happy moments with the delivery of a set of triplets on the 24th of March 2019 in one of the IDP camps in Kajuru local government Area of Kaduna state.

“The 3 babies came when I was least ready for them but right now they are the only consolation I have and my game changer” she said.

Mrs Esther did not mince words in describing the joy she now have knowing something good can still happen in spite of the ugly incident she witnessed. However, the happy moment was short lived as the question of how to take care of the triplets with other 2 children before the triplets in an IDP camp rang in her ears.

Her own village, Gidan Gajere, was attacked on Thursday 2nd of May 2019 at a time she was contemplating going back home as it appeared calm was returning back to the community. Following this attack, the entire village was completely razed down and Esther’s husband lost all their farm products and tools.

For Mrs Esther, her Triplets and two other children, there are no plans of returning home for now though they eagerly would wish to do so.

Life is difficult for her and the babies. She is living largely on gifts and donations from individuals and groups. ‘’The Local government authority arranged Health Personnel to be visiting me and the babies for medical attention and assistance, but I am not seeing much of them” she lamented.

Whenever her babies are sick she does visit the Local Government Clinic where she receives prescriptions and buys from drug stores outside the camp with money received from people and groups. "In the midst of all these, my greatest consolation is seeing my babies alive and safe’’ she said hoping for the best.

The family of Esther is one of the many families who have been assisted in camps by the Nigerian Red Cross Society (NRCS). With support from the International Committee of Red Cross (ICRC), the NRCS had assisted the IDPs with food and non food items

A lot is still expected to be done by Government agencies, charity organizations and individuals in order to touch the lives of these infants and thousands of other displaced persons from the Kajuru crisis especially with the high number of orphans recorded