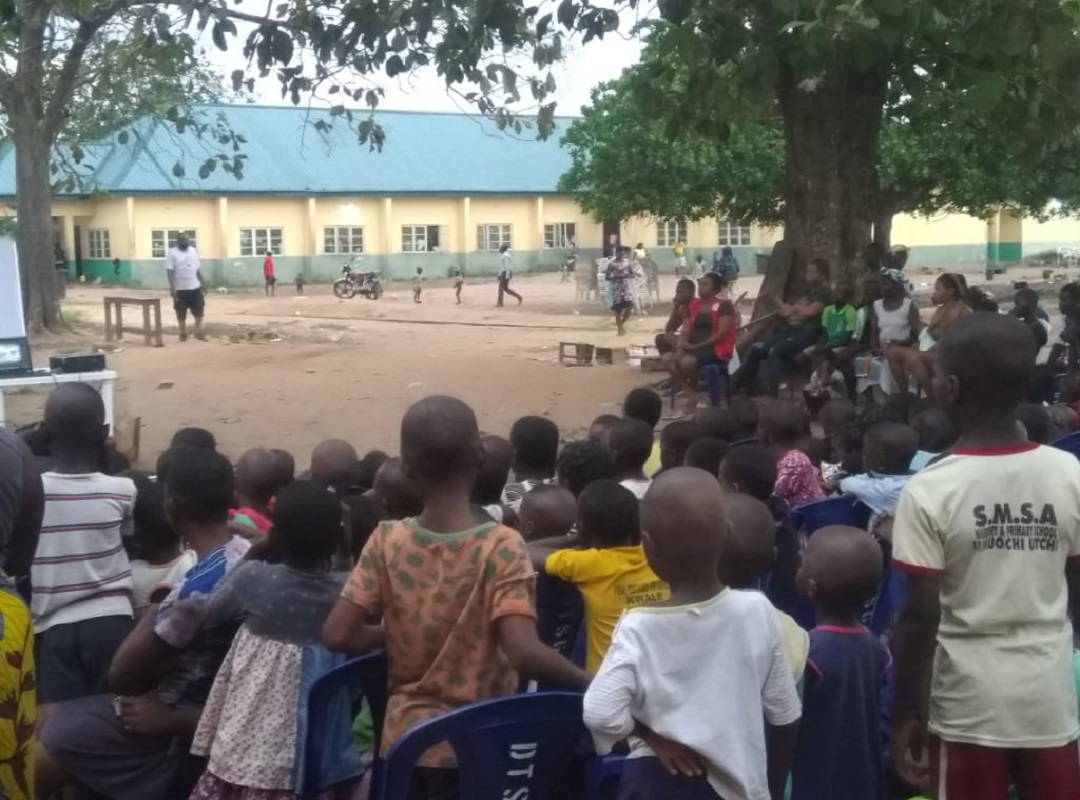 About one thousand three hundred and forty-five Persons Displaced by the 2019 floods in Delta, have benefited from a mobile cinema outreach which focused on Cholera, Malaria, Hand washing and Personal Hygiene.

The IDPs were lectured on the need to cover their food and wash their hands regularly especially before cooking and eating as well as after using the toilet to avoid contamination.

The Delta State Water, Hygiene and Sanitation, WASH Focal person, Joseph Oduah said that “the programme was aimed at promoting personal hygiene especial now  that the IDPS are far from the environment that they are used to, home.”

He explained that “most of the IDPS often face the challenge of sharing toilets and bathrooms which is different from what they were used to in their various homes and this could lead to open defecation in the camp especially by children, hence the need to educate them on the dangers of such and other habits that could lead to outbreak of diseases.

The Leader of Red Volunteers at the Oneh Primary School, Internally Displaced Persons, IDP Camp, Mrs. Ada Monyei said the Red Cross deemed it fit to organize the programme not only to educate the IDPS on hygiene promotion but also to entertain them as some of the lectures were done with short movie clips of the various subjects discussed.

Mrs. Monyei said the programme would go a long way to curb some bad sanitary habits being practiced by some of the IDPS because prior to now they were just cautioned individually stressing that the mobile cinema outreach was planned in such way to trigger behavioral change so that the IDPs would maintain the habits that they have been taught even when they return to their communities after the floods.

Meanwhile, Red Cross volunteers in Ashaka and Kwale Internally Displaced Persons Camp have charged the IDPs to imbibe good sanitary habits in order to keep diseases far from them.

The volunteers who spoke while organizing Mobile Cinema Outreach in the two Camps noted that a dirty environment is a breeding ground for diseases while a clean surrounding contributes immensely to the general wellbeing of all.

One of the Leaders at the Camps Aguiyi Emnmanuel said that “a good sanitary habit is not dependent on money but conscious and continuous efforts to lead a healthy life.”

Aguiyi noted that “one of the best method that would enable the IDPs cultivate and maintain good sanitary habits is the use of combined efforts which he explained as  community leaders gathering members of their various communities to clean the whole community on stipulated days while sanction would be placed on persons living in dirty surroundings.”

Some of the beneficiaries including Rowlings Irene lauded the Red Cross for the programme noting that she has witnessed outstanding behavioral changes in some of the IDPs especially those in her room and those assigned to the kitchen.

On his part, Chinoso said he has learnt to cover his food and wash his hands with soap and water regularly before eating and after using the toilet.

Also speaking was Mr. Gideon Omonigho who noted that using mosquito nets and ensuring that the environment is devoid of stagnant water are some of the practices that could prevent malaria.

In all the mobile cinema outreach also featured talks and short video clips on the dangers open defecation, malaria prevention and what to do when a person has malaria or cholera.